Knowledge is powerful. We want you to start composting and responding to concerns is key for acceptance. Please reach out to us, if you have other concerns that haven’t been addressed. We will take time to answer them.

We all have had a rotten potato somewhere and almost fell over when we found it behind the things it was hiding.

So no, real composting does not smell bad.

Bad smells in compost usually have one of these two reasons:

With these two causes in mind we can create an odorless composting experience. Promised!

A compost needs primarily four things: Carbon, nitrogen, oxygen and water. And those need to be balanced (which isn’t hard to do.) Strong odors are a sign of an imbalance. Restoring the balance means eliminating the odors.

Carbon will absorb excess moisture and odors. So when you sense a strong smell we advise to add more carbon. This will cover the smell physically and wick away those bad smells. Always remember carbon is your best friend to prevent odors.

That’s why some worm bins already come with a “worm blanket” that you keep on top. We will keep a layer of moist cardboard or paper bags on top. For extra strong smells we will use a thick layer of wood chips. If you do smell a really foul odor your worms are also not happy about the conditions in your bin. We want to keep them healthy and your composting process flowing.

When your compost bin is too moist, almost wet or water logged, it will create so called “anaerobic conditions”. That means this moisture is depleted of oxygen. Whenever you discover a bad smell and see stagnant water you can stop it by dumping the water out. But be careful where you drain it to. The liquid itself probably has a strong odor and would best be drained into wood chips or into your sewer. So take care that you don’t dump it on a slope towards your neighbors property, for example.

And remember: odorless composting needs oxygen to work. At first the moisture will still contain some oxygen but that will be used up pretty quickly. Anaerobic conditions are also not great for your worms. You can avoid anaerobic conditions by adding drain holes to your compost bin. Some come with a spigot for drainage, if yours doesn’t have it, be extra careful about monitoring the moisture every once in a while.

We have heard this concern from invasive species remediators:

“Do compost worms pose a threat to native species?”

Our Answer: The concern is valid and can be resolved by adding context. 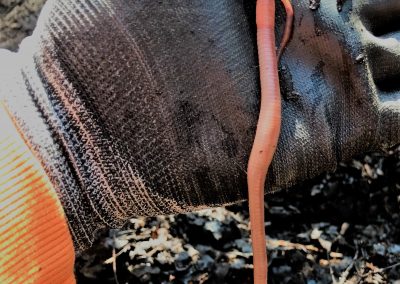 The jumper worm has a distinct ring.

Although worms are not considered a native species to the United States, it is fair to say that they have been reintroduced centuries ago. Worms lived in North America before the last Ice Age. Our current growth forests were established after this glacial period. These ecosystems (native forests) evolved without the presence of compost worms.

These forests rely on slowly decomposing leaf litter on the ground. Several species of worms like to feed on this layer and turn it into vermicastings. This creates problems for these old forests, because now other and often so called “invasive species” can take hold. When this happens, a transformation of the ecosystem can take place because the newly introduced species might be able to outgrow other native plants and deprive them of nutrients, light, and water. That is the primary reason to be concerned about introducing worms into such an old ecosystem.

When talking about invasive worms in North America, we also have to consider that we are looking at different types of worm species. The threat identified by ecologists stems primarily from “jumper worms” and not the typical composting worms.

Jumper worms are from a different genus and can be distinguished by their jumping movements, which are triggered when touched. It looks like they almost spring-like zap away from you. Their vermicast is also much larger in size and they seem to be able to reproduce without a partner.

It is documented that different worm species have already migrated to many states in the US, including Ohio, and have reached as far as Canada. The presence of those worms in Canada is a given and whether we use compost worms in Ohio or not does not change this.

Scientifically, it is currently consensus that the introduction of those worms can not be reversed.

Bernie Williams, Invasive Species Expert with the Department of Natural Resources of Wisconsin:

“We are going to have to live with them.”¹

Anglers who use worms as bait for fishing are far more likely to introduce worms to a natural habitat where they shouldn’t by throwing away unused bait at their fishing spot.

Landscapers can also coincidentally move worm cocoons from one location to another when soil clumps get stuck to their equipment. They are encouraged to wipe their boots and equipment off prior to leaving a location.

It is okay to use compost worms in the context of organic trash recycling and urban gardening in Cleveland Heights and surrounding cities.

More resources about this topic:

The Atlantic: Jumping worms are taking over north American forests